The Benefits of Being a Cashless Business in the UK 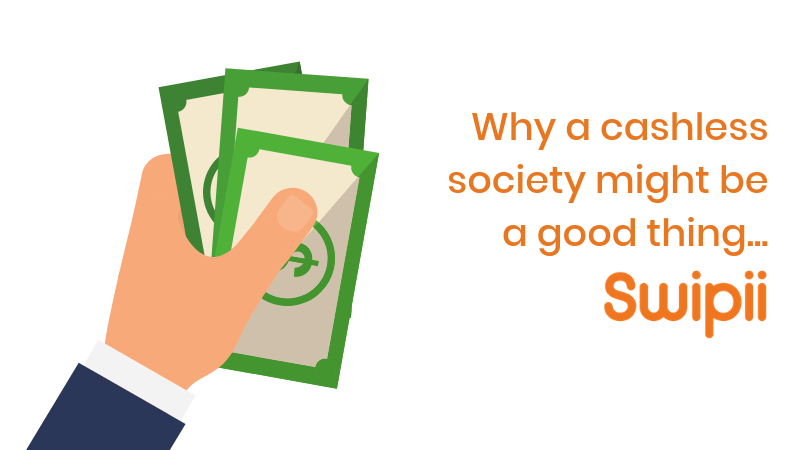 Many small businesses baulk at the idea of a cashless society. With good reason, cash has been the lifeblood of local economies for as long as most business owners have been alive. And the rate at which shoppers are moving to card payments, and contactless payments, has been relatively rapid. Is this a good thing? Here at Swipii, we are on the side of the fence that thinks a cashless society could be a great thing for businesses. Why? Well, you’ve just discovered the very point of this article. Read on to find out why we think there are so many benefits of being a cashless business in the UK.

First, it’s important to look at the trends in payment we’re experiencing in the UK. There are some stark stats to be looked at when reviewing the steady downfall of cash over the past few years, and the years to come. Here are some quick facts:

Why are people moving over to contactless and card payments?

So what’s the deal? Why are local shoppers going cashless in favour of card and contactless payments? The answer, for the most part, is convenience. However, there’s another element which is part of the story here. An increase in trust that consumers have in technology is hugely important also. Apply Pay, Google Pay and Samsung Pay have become widely used by younger generations, with convenience playing a huge part in this, but also trust in the technology behind the security of these payments. The ability to freeze and unfreeze your card has definitely contributed to reducing shoppers’ fear of card theft and being left with major fraudulent bills when cards go missing. Compared to older generations, the number of young people utilising mobile payments is a significant portion of the market (Source: UK Finance).

Recently, an article from the BBC stated that millions are choosing a cashless lifestyle. Cash has been used by people across the UK to budget, for example, I’ll take £50 out to go shopping and when that runs out, it runs out. In 2019, there was a rise in popular digital banks like Monzo and Revolut which not only provide another reason for the increase in card payments but also provide shoppers with an easy way to budget, with digital receipts and “You’ve spent £22 of your £25 budget” push notifications now commonplace.

The downsides of not being a cashless business

All this aside, cash is still an acceptable form of payment, used by 1.9 million across the UK  as their main payment method for day-to-day spending (Source: UK Finance). But it comes with multiple downsides. Some more obvious than others. Do any of these downsides apply to you having a cashless business?

The use of card machines, on the other hand, has become an absolute necessity for businesses big and small as the number of consumers who a) have debit and credit cards and b) use them extensively, has increased dramatically and continues to grow especially as a result of the 2020 pandemic. As a small business, it may seem from the offset that a card machine is just another cost to the business that you feel will be to your detriment. But there are some huge benefits that come along with accepting card and becoming a cashless business! Here’s what we found:

What do you think?

What’s your opinion on the continual decline of cash usage? We’d love to hear your take on the situation!

If you're a local hospitality business looking for a customer loyalty tool that will integrate seamlessly with your business and generate more revenue, visit Swipii for Business or book a free 15 minute demo with our team!